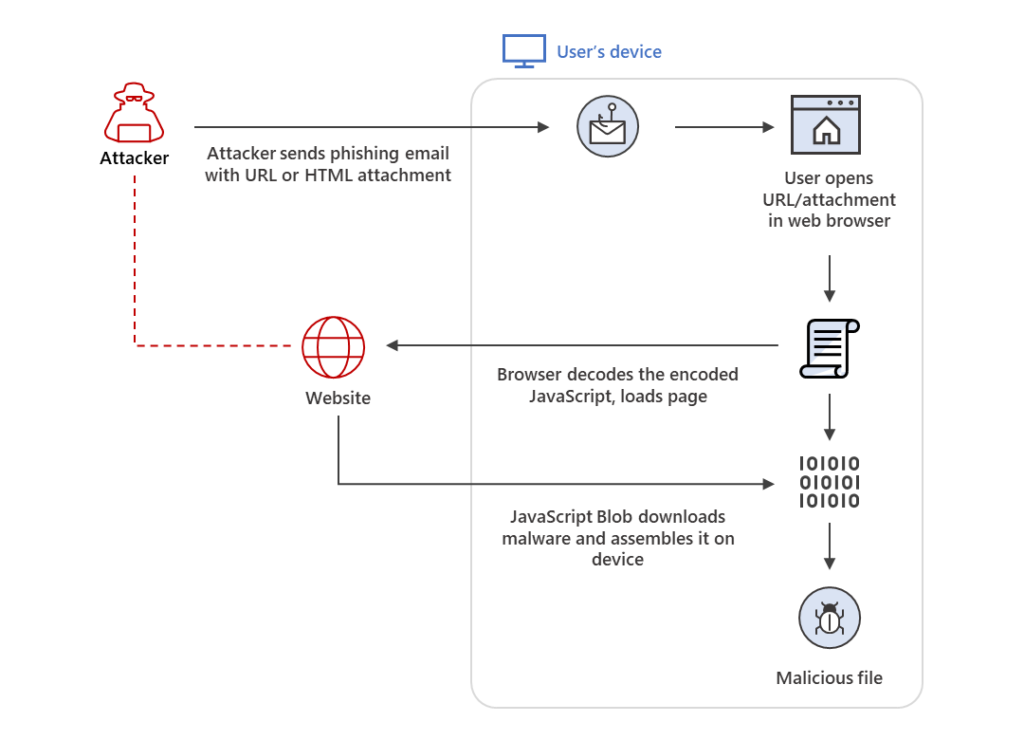 HTML Smuggling is an evasive malware delivery technique that leverages legitimate HTML5 and JavaScript features to deploy banking malware, Remote Access Trojans (RATs), and other malicious payloads to conduct a targeted attack. As the name suggests, HTML smuggling lets an attacker “smuggle” an encoded malicious script within a specially crafted HTML attachment or web page into a company bypassing it s normal defenses. When a victim user opens the HTML in their web browser, the browser decodes an innocuous script, which then reaches out to the Internet to download the true malicious script. That, in turn, produces or reconstructs a dangerous piece of malware on the victim’s device. Along the way, because all communications were encrypted by design, the malware was smuggled onto the target user’s machine.

HTML smuggling is made possible with the HTML5 ‘download’ attribute for anchor tags. When a user clicks on the HTML link it triggers a download of the file referenced in the ‘href’ tag. For example:

When a user clicks on the link, the file ‘evil.doc’ would be saved to the device and named ‘innocent.doc’. The same can be achieved using Javascript:

Smuggling malware past company defenses through these attacks is an example of the arms race in hacking and company defenses. The more defenses that are put in place in the average company, the more sophistication hackers are using to bypass those protective measures. What can an SMB do to prevent these forms of attacks? Let’s read on to find out.

There are two basic principles that can help enormously in such cases as HTML Smuggling. First, consider implementing Network Segmentation to reduce lateral movement if an attacker gets into your network. Second, implement the Principle of Least Privilege (removing administrative rights from end-users) so if hackers attempt to compromise an end-user’s machine, perhaps they fail because the privileges aren’t there to be exploited. However, if they succeed, the user’s computer won’t have access to everything, which limits the potential damage (at least initially).
Other actions that can be taken involve security awareness training, to spot these forms of attack and prevent them from the beginning in the first place. Read on for more protective measures companies can take that don’t break the bank.