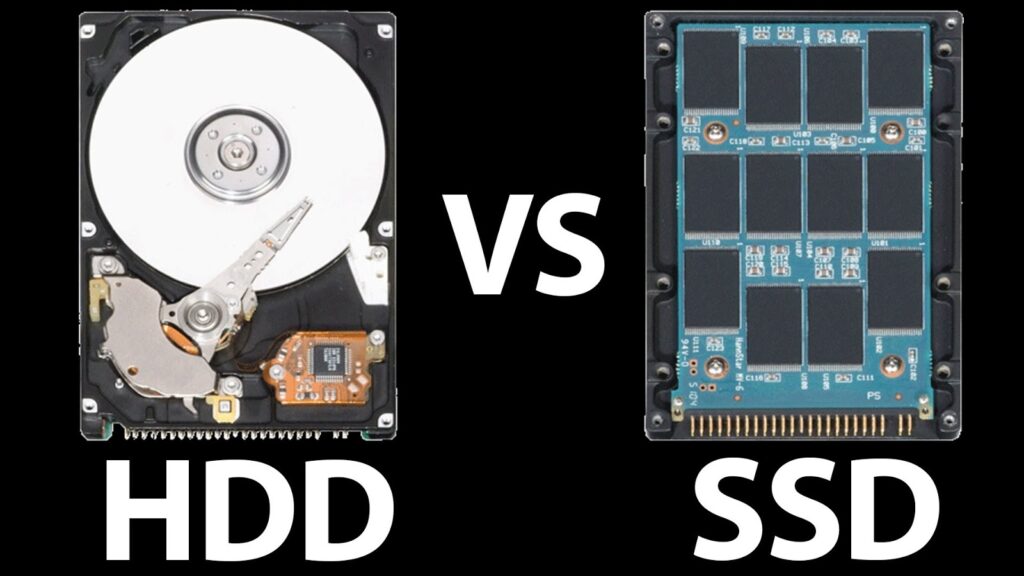 A Solid State Drive (SSD) is a type of storage device that supports reading and writing data and stores the data in a permanent state even without a power source connected. SSDs serve the same function as hard drives, but their internal elements are much different. Unlike hard drives, SSDs do not have moving parts (which is why they are called solid-state drives). Instead of storing data on magnetic platters, SSDs store data using flash memory. Since SSDs have no moving parts, they don’t have to “spin up” while in a sleep state and they don’t need to move a drive head to different parts of the drive to access data. Therefore, SSDs can access data, reading and writing it, must faster than HDDs can.  This performance difference is enormous often 50x to 100x faster in some cases.

SMBs should have SSDs set up in most if not all of their computers, as they are significantly better than hard drives (HDDs). Take a look at the SSDs vs HDDs to determine which is best for your company:

SSDs are more expensive than hard drives (HDDs) in terms of dollar per GB. A 1TB internal 2.5-inch hard drive costs between $40 and $60, but as of 2020, the cheapest SSDs of the same capacity and form factor start at around $100; translating into 4-6 cents per GB for the hard drive vs 10 cents per GB for the SSD. Since hard drives use older, more established technology, they will likely remain less expensive for the foreseeable future. Though the per GB price gap is closing between hard drives and low-end SSDs, although those extra dollars for the SSD could push your system price over budget.

SSDs are rarely found in capacities greater than 2TB. You’re more likely to find 500GB to 1TB units as primary drives in systems. 500GB is considered a ‘base model’ hard drive capacity for premium laptops these days, but price concerns pushes that down to 128GB-256GB for lower-priced SSD-based systems.

Users with big media collections or who work in content creation will require even more, with 1TB to 8TB drives available in high-end systems. Cloud-based storage may be good for housing files you plan to share among your smartphone, tablet, and PC, but local storage is less expensive, and you have to buy it only once, not subscribe to it.

This is where SSDs shine. SSD-equipped PCs boot in far less than a minute, often in just seconds. HDDs require time to speed up to operating specs, and continues to be slower than an SSDs during normal use. PCs or Macs with a SSDs boot, launch apps, and transfer files much faster.

Due to HDDs having rotary recording surfaces, they work best with larger files that are laid down in contiguous blocks. That way, HDD heads can start and end its read in one continuous motion. When hard drives start to fill up, bits of large files end up scattered around the disk platter, causing the drive to suffer. While read/write algorithms have improved to the point that the effect is minimized, hard drives can still become pushed to the point of affecting performance. SSDs can’t because the lack of a physical read head; meaning data can is stored anywhere without penalty – contributing to it’s inherently faster nature.

An SSD has no moving parts, so it is more likely to keep your data safe in the event you drop your laptop bag or your system gets shaken while it’s operating. Most hard drives park their read/write heads when the system is off, but when they are working, the heads are flying over the drive platter at a distance of a few nanometers. Besides, even parking brakes have limits. If you’re rough on your equipment, an SSD is recommended.

Because hard drives rely on spinning platters, there is a limit to how small they can be manufactured. Years back, there was an initiative to make smaller 1.8-inch spinning hard drives, but that stalled at about 320GB, and smartphone manufacturers only use flash memory for their primary storage.

SSDs have no such limitation, so they can continue to shrink as time goes on. SSDs are available in 2.5-inch laptop-drive sizes, but that’s only for convenience in fitting within established drive bays. They are increasingly moving, though, to the M.2 form factor discussed above, and these drives come in 42mm, 60mm, 80mm, and 120mm lengths.

Even the best HDD will emit a bit of noise when it is in use. Faster hard drives will tend to make more noise than those that are slower. SSDs make no noise at all; as they’re non-mechanical. SSDs don’t have to expend electricity spinning up a platter from a standstill; none of the energy consumed by the SSD is wasted as friction or noise, rendering them more efficient. On desktops or in servers it leads to a lower energy bill.

To learn more about SSDs and HDDs, watch this short video: