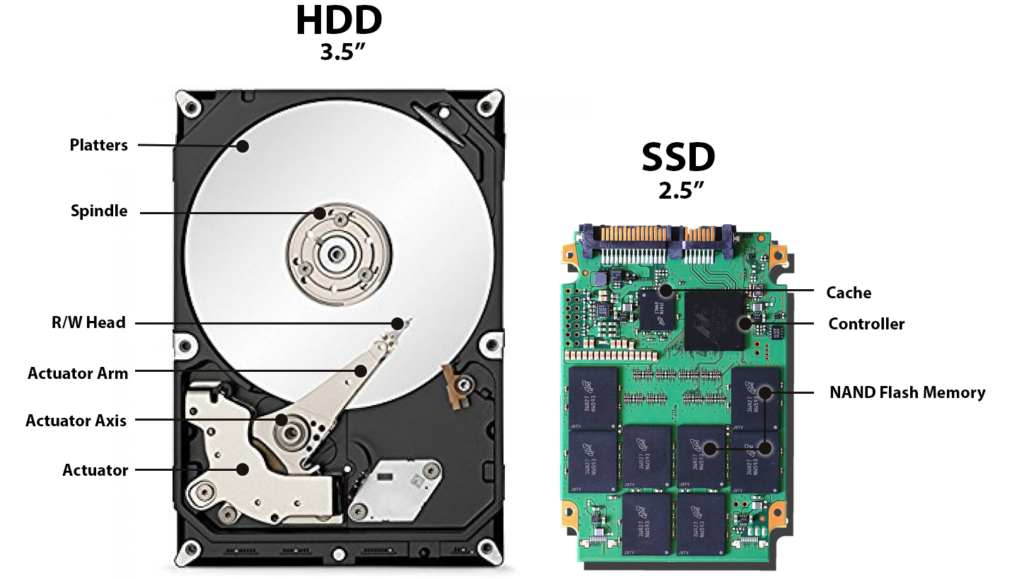 A Hard Disk Drive (HDD), also known as a hard drive, is a computer storage device holding magnetic disks or platters spinning at high speeds. It’s the only long-term storage device on most machines. Unlike random access memory (RAM) where data is stored while a computer is in operation, a HDD can store your data after power has been removed and the system has been shut-down. HDDs store your operating system, software programs, and personal data. For years improvements in speed and performance for permanent storage in computing devices were tied to spinning these magnetic disks faster and shrinking the size of the digital tracks on the magnetic media.  Early hard disks spun at 5400 revolutions per second.  Today the most advanced and speediest HDDs spin at 15,000 RPM.  However, there is a brand new alternative that is 50 times faster than even the most advanced 15k HDD – and that is a Solid-State Drive (SSD). HDDs differ from SSDs as SSDs have no moving parts. SSD’s don’t “spin up” from a sleep state, and don’t need to move a drive head to different parts of the drive to access data. SSDs can read and write data at least 50 times faster than traditional HDDs and are much more common today as their prices have come down significantly in recent years.

Business owners should take a look at the machines they have their staff using. Ensuring that you have up-to-date systems, operating at peak efficiency is helpful to employees performing work tasks in a reasonable time frame. Below are the distinct advantages and disadvantages of HDDs compared to SSDs so you can determine the right storage devices for your SMB.

CyberHoot loves SSDs a good deal. Performance, reliability, compatibility, and capacities are now a compelling reason to consider using SSDs for all but a few special cases.  For example, applications that record and therefore write a lot of data repeatedly are not good for some types of SSDs.  Outside of this edge case, CyberHoot recommends you consider an SSD for your desktop and laptop equipment purchases.

To learn more about the difference between HDDs and SSDs, watch this short video: