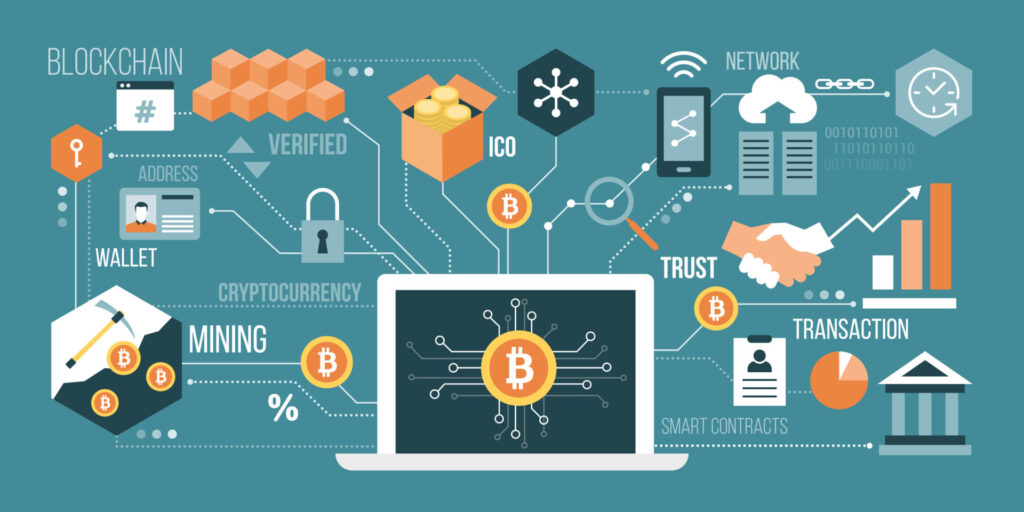 Blockchain is a digital record of transactions. The name comes from its structure where specific records called blocks are linked together in a single list, called a chain. Blockchains are used for recording transactions made with cryptocurrencies, such as Bitcoin, and have new importance in the Non-Fungible Token (NFT) world, ensuring the authenticity of digital assets.

Each transaction added to a blockchain is confirmed by multiple computers on the Internet. They work together, creating a system to ensure each transaction is valid before it is added to the blockchain. This decentralized network of computers ensures a single system cannot add invalid blocks to the chain. When a new block is added to a blockchain, it’s linked to the previous block using a cryptographic hash generated from the contents of the previous block. This process ensures the chain is never broken and each block is permanently recorded. It’s also intentionally difficult to alter past transactions in blockchain since all the subsequent blocks must be altered first.

How Does Blockchain Affect Me?

Blockchain is commonly known for its use in cryptocurrencies such as Bitcoin, Litecoin, and Ether. The technology has numerous other uses aside from cryptocurrency and NFTs, for example, it allows “smart contracts,” which execute when certain conditions are met. This provides an automated ‘trust’ system for transactions between two parties. Blockchain can potentially be used to allow individuals to pay each other without a central clearing point, which is required for ACH and wire transfers. It has the potential to greatly increase the efficiency of stock trading by allowing transactions to settle almost instantly instead of requiring three or more days for each transaction to clear.

Blockchain technology can also be used for non-financial purposes. For example, the InterPlanetary File System (IFPS) uses blockchain to decentralize file storage by linking files together over the Internet. Some digital signature platforms now use blockchain to record signatures and verify documents have been digitally signed.

Experts in the field believe that blockchain is the future of verifying identities. Rather than having a Social Security Number (SSN), you would have a similar ‘identifier’ through blockchain. These same people believe that these identifiers can be used to create a new safe and secure voting system in the United States or other influential countries. If blockchain has the ability to ensure authenticity, then using blockchain to vote electronically can potentially reduce the chances of election fraud or other irregularities.

To learn more about Blockchain, watch this short video:

Why NFTs Are The Future