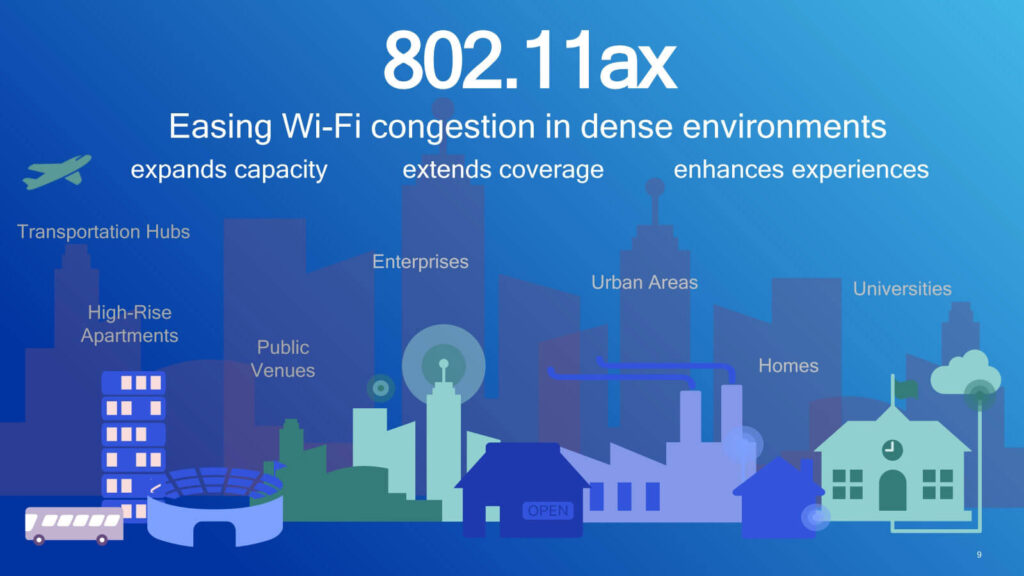 Do you ever get frustrated with your Internet speeds and find yourself saying “there’s no way this is as fast as it can go”? Well luckily for you, there’s a new and improved Wi-Fi standard that will make your Internet speeds even faster. In September 2020, the next generation of Wi-Fi, called Wi-Fi 6 is expected to ratify. Wi-Fi 6 compatible equipment has started to arrive and there’s a good chance it’ll be inside your next phone or laptop.

The main goal of Wi-Fi 6 is to improve the network communications protocol to the large number of devices proliferating on our networks. To the everyday Internet user that may not mean much, but Wi-Fi 5 allowed about 5 devices per US household, Wi-Fi 6 now allows 9 devices per household.

Imagine being in a home where one person is streaming Netflix, another is playing a game online, someone else is video chatting, and a whole host of smart gadgets (a door lock, temperature sensors, light switches, etc.) are all checking in on a schedule. As IoT devices proliferate, Wi-Fi 6 was specifically designed to address previous standard’s network communications shortcomings. The top speeds of those devices won’t necessarily be boosted, but the connectivity will be more consistent.

The new network will improve the maximum speed from Wi-Fi 5 of 3.5 Gbps to 9.6 Gbps, nearly tripling the speeds. According to the experts these speeds are:

“theoretical maximums that you’re unlikely to ever reach in real-world Wi-Fi use. And even if you could reach those speeds, it’s not clear that you’d need them. The typical download speed in the US is just 72 Mbps, or less than 1 percent of the theoretical maximum speed”

These speeds may be theoretical for use on one device, but Wi-Fi 6 allows the 9.6 Gbps to be split up across multiple devices on a network; allowing more potential speeds on the devices.

A new tool in Wi-Fi 6 allows devices to schedule communications with a router, reducing the amount of time they need to keep their antennas powered on. Routers need antennas functional to transmit and search for signals to Wi-Fi-enabled devices. The tool promotes less battery drainage and improved battery life overall. The battery improvement occurs due to the router scheduling “check-in times” with devices. Laptops and mobile devices need constant connectivity, this wouldn’t affect those machines. The tool is meant for small, low-powered Wi-Fi devices that need to connect less often. Devices affected, for example, are smart home devices that are only operative at specific times throughout the day.

In 2019 Wi-Fi networks had an optional upgrade with security protocol WPA3 introduced. WPA3 makes it harder for hackers to crack passwords by continually guessing them, and makes some data less valuable even if hackers manage to obtain it. Current devices and routers can support WPA3, but it’s voluntary. For a Wi-Fi 6 device to receive certification from the Wi-Fi Alliance, WPA3 is required. Wi-Fi 6 devices are expected to include the stronger security once the certification program launches for these new systems.

Should I Run To The Store Right Now?

It depends. The devices that currently support Wi-Fi 6 are sparse and not certified to the non-ratified Wi-Fi 6 standard. The inclusion of Wi-Fi 6 is likely to become standard in 2021. The Wi-Fi Alliance will launch its Wi-Fi 6 certification program in the fall of 2020, guaranteeing compatibility across Wi-Fi devices. Your Wi-Fi 6 hardware won’t need to be replaced, but because the standard isn’t ratified you may have to update your firmware later on.

Secondly, if you have a proliferation of devices on your network causing connectivity issues you may want to purchase a Wi-Fi 6 router now. If you’re not having connectivity issues, it’s not a “game-changing” update for your household or company. Wi-Fi 6 will start to be built into new devices by default, allowing you to get them whenever you end up purchasing a new Wi-Fi-enabled device.

Finally, even if your network is working well today, adding 1-2 more devices to the network may cause every device to communicate ineffectively. If that happens you should consider upgrading to a Wi-Fi 6 router right away. Your communications should improve dramatically on your network with a Wi-Fi 6 router.

To learn more about Wi-FI 6, watch this short 4 minute video: